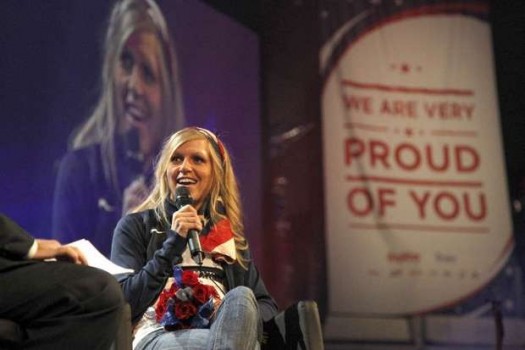 Lisa Uhl (Kohl), a finalist for The Bowerman in 2010, answers questions and addresses the crowd at a homecoming celebration for Iowa Olympians.

In one of the largest Olympic homecomings in the United States, more than 5,000 fans showed up to give the athletes a heroes welcome at the Knapp Center on the campus of Drake University.

The two-hour program consisted of video highlights, interviews with the athletes, music, dancing and a few surprises. The athletes took the stage, one by one, while Iowa Governor Terry Branstad declared it “Iowa Olympian Day.”

The event brought tears to some and smiles to all, making memories for the athletes and inspiring the next generation of Iowa Olympians.

The Olympians were overwhelmed by the support from the crowd who saved the biggest ovations for Douglas and Jones.

“It was amazing to see a long line outside when I got here,” said Uhl, who finished 13th in the women’s 10,000-meter run at the Olympics. “This is something really special that wouldn’t happen in every state. To be a part of this is a great way to cap my Olympic experience.”

“I really love to be back home,” said Jones. “I’m thrilled to be back and feel the support of people who have been there for me throughout the year.”

“It’s great to be back…to see all the familiar faces that have influenced my life,” Leek added. “This is where the heart is.”

Varner and Douglas aren’t native Iowans, but you wouldn’t have known it by the welcome back to Iowa party.

They each took different paths to Iowa. Douglas moved to West Des Moines, Iowa, from Virginia Beach. Va., two years ago to train at Chow’s Gymnastics with coach Liang Chow.

Varner, a native of Bakersfield, Calif., attended Iowa State where he won 2009 and 2010 NCAA wrestling titles at 197 pounds before becoming the sixth Cyclone wrestler to win an Olympic gold medal.

“It’s pretty surreal right now,” said Varner who won the gold medal at 96kg/211.5 pounds on the last day of the Olympics. “It hasn’t even been a week yet since I competed (Sunday, Aug. 12).

“I guess I’m the outcast because I grew up 40 hours from here,” Varner said. “But this was my home for five years and it’s great to see everybody out here.”

Douglas captivated the world and made history by becoming the first U.S. gymnast ever to earn gold medals in the all-around and team competitions at the same Olympics.

She was the last Olympian to appear on the stage at the homecoming reception after a video recapped her journey to the Olympics.

As expected, Douglas captured the hearts of the crowd with frequent cheers and applause during her appearance in which she revealed it was during the U.S. Olympic Trials that this was all possible.

“At the Trials it clicked in my head that I really had a shot at this so I went back in the gym and polished up my skills,” said Douglas, who had spent the past week making coast-to-coast national TV appearances. “When I headed to London I was ready and so well prepared.”

Iowa Lt. Governor Kim Reynolds gave a surprise to Douglas, presenting her with a proclamation saluting her as an honorary citizen of Iowa.

“I’m proud to be an Iowan,” beamed Douglas, who capped off the day later by welcoming national talk show host Oprah Winfrey to her West Des Moines residence for her show “Next Chapter” which will air an interview on Sunday (Aug. 26).

“It (Iowa) is a second home for me and I love it so much. I love the atmosphere and people. I feel honored. I’m so glad I can give back to Iowa now.”

Chow, who coached both Douglas and Shawn Johnson (2008) to Olympic gold, also was recognized before the crowd along with Johnson.

“It was neat being over there (London) and watching them compete,” added Johnson, a native of West Des Moines, Iowa. “I was a proud Iowan cheering for all of them.”

Douglas, Leek, Uhl and Varner couldn’t say enough about their experiences of participating in their first Olympics.

“I had so much fun,” said Douglas. “Words can’t describe it. It has been an amazing ride and journey.”

“It was what I thought it was going to be and more,” said Uhl.

“An amazing experience, life changing for me and it really is an inspiring thing to go through,” Varner added.

Returning to an appreciative crowd in her hometown was the perfect dose of medicine for Jones continuing to heal after missing the medal stand by a tenth of a second in the 100 hurdles.

While Jones’ quest for Olympic redemption fell short after her gold medal run in 2008 ended when she clipped the next-to-last hurdle in the finals, her passion, candor and determination won her legions of new fans.

Natasha Kaiser-Brown, who earned a silver medal on the Team USA women’s 4×400 relay in the 1992 Olympics, introduced Jones to the crowd. Both Kaiser-Brown and Jones were multiple state sprint champions at Roosevelt High School in Des Moines.

“Throughout all the challenges, Lolo has responded with nothing but poise and grace,” said Kaiser-Brown, who is the head men’s and women’s track and field coach at Drake University.

Jones became emotional right away, fighting back tears as the crowd showed their support for her with a loud ovation.

“This is honestly what I need right now,” said Jones. “It has been quite difficult…I’m touched by the warmth here. After the Olympics, I was feeling my heart get quite cold and bitter. I was trying to wrap my head around it. To have this support…it’s definitely a light in a dark time.”

Jones also was quick to point out that she became an instant admirer of how Douglas handled the media spotlight during the Olympics.

“Gabby did a great job and is definitely a role model,” said Jones. “I was already picking up stuff with how she was dealing with (it), like how to handle my own kind of controversies. She didn’t need any advice from me.”

Douglas said she plans on remaining in West Des Moines to continue training for another Olympic berth.

“I’m not going anywhere,” said Douglas. “Nothing has changed. Iowa is my home. My future plans are to get more international experience. I love competing for Team USA. I’m so young and fresh. I think I still have a couple more tricks under my belt.”

Douglas will focus attention in less than two weeks on the Kellogg’s Tour of Gymnastics Champions that will visit 40 cities from Sept. 9-Nov. 18 including stops in Colorado Springs, Colo., Sept. 29 and Des Moines Oct. 12.

The 19-year-old Leek departed Sunday for college, traveling to Texas A&M where she will major in molecular and cell biology.

“They have one of the countries’ best archery programs,” said Leek. “It’s a great way for me to get a great education and stay in shooting. After two years I’ll put college in the back burner and starting going strong again in archery. I feel like I’m capable of medaling in 2016 if I put in the hard work and get my game on track. London has inspired me to do well in Rio (de Janeiro).”

Jones and Uhl also plan on return trips to the Olympics.

Jones will be 34 years old when the 2016 Summer Olympics occur in Rio de Janeiro, Brazil, but feels she can contend for a medal, saying she received encouragement from Gail Devers who was 34 when she won the silver medal in the women’s 100 hurdles at the 2001 World Championships.

“Everyone thinks we disappear for four years until the next Olympics,” said Jones. “But I’m looking forward to fighting for a medal at the World Championships next year.”

“The last time the USA Championships were at Drake (2010) I won the national title, so I’m anxious to compete before my hometown fans again,” said Jones.

“I’m looking forward to being back on the blue oval at Drake,” said Uhl, who captured four NCAA individual titles during her career at Iowa State. “I’ll run the 10,000 and perhaps double in the 5,000.

“My Olympic experience has put more fuel in the fire moving forward,” Uhl added. “I was one of the youngest in the race and ran a personal best in the Olympics. So, I hopefully I can make the Olympic team in 2016 and contend for a medal.”

Meanwhile, Varner’s wrestling future is torn between remaining active as a competitor and coaching.

“I plan on disappearing for a while,” said Varner. “I’m going on a big fishing trip with my coach (Cael Sanderson) and we’ll talk about my future. In the next month I’ll sit down and make a decision.”

Hy-Vee Food Stores, which sponsored the event, donated $25,000 to the Special Olympics of Iowa in the name of each Olympian.