Michigan State Women Emerge at No. 1 in Division I XC National Coaches’ Poll 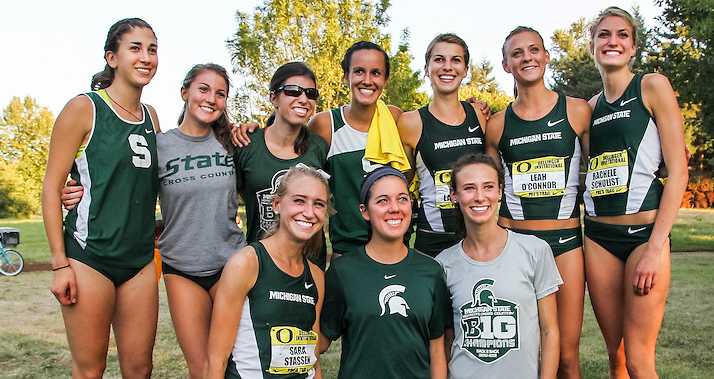 If that isn’t bitter enough news in Ann Arbor, this won’t help: As the Wolverines fell to No. 4 in the week five edition of the poll today, there was cause for celebration just an hour to the northwest as in-state rival Michigan State climbed to No. 1 for the first time dating back to the beginning of the USTFCCCA archives in 1995.

The change at the top was indicative of a significant shake-up throughout the entire poll following Pre-Nationals and the Wisconsin adidas Invitational, as all but three teams remained stationary from the last poll two weeks ago – a trend that repeats itself in the men’s National Coaches’ Poll also released Tuesday.

Where Michigan faltered at Pre-Nats – losing out to both new No. 2 Georgetown and No. 3 Oregon (more on them in a moment) – Michigan State flourished at Wisconsin. The Spartans scored a paltry 87 points to the 191 racked up by No. 5 Arkansas and the 212 put up by new No. 6 Iowa State.

How dominant was MSU? Not only did the Spartans put six finishers in the top 45 – no other team had three – but they also had the smallest spread from runners No. 1 through 5 at 54 seconds among the meet’s top five teams. That combination of formidable pack running and reliable low sticks in runner-up Rachele Schulist, ninth-place Leah O’Connor and 14th-place Lindsay Clark earned the Spartans 10 of the 12 first-place votes in this week’s poll.

Splitting those two remaining first-place votes were the two teams responsible for deposing Michigan from atop the national top-30: No. 2 Georgetown and No. 3 Oregon. The former is up to its best rank since checking in at No. 1 in week three of its national title season.

Georgetown scored 110 in Terre Haute this past Saturday to the 139 posted by Oregon and 143 put up by Michigan. For the Hoyas, Katrina Coogan led the way with a third-place overall finish ahead of a pack of five more runners just 14 seconds apart from 19th through 38th. All without last year’s 47th NCAA finisher Samantha Nadel, who has yet to debut in 2014.

While the Hoyas’ pack held relatively steady throughout the race – scoring 81 points at the 3k split and 93 at 4k – the Ducks of Oregon utilized a different strategy. Hanging back through the first 4k (fourth-place with 181 points) and moving a tight pack of five runners up through the field was the key to Oregon’s success. A mere 10 seconds separated top runner Megan Patriginelli in 18th and their No. 5 in 36th – plus just an additional 12 seconds for the remaining two finishers.

With potential low scorers Waverly Neer and Sarah Baxter yet to make their debuts, Oregon may not have shown all their cards just yet, either.

Michigan, meanwhile, need only look back one year for some solace after dropping to No. 4. After all, eventual 2013 NCAA Champion Providence finished third at Wisconsin, subsequently falling to – you guessed it – No. 4 in the National Coaches’ Poll.

Iowa State moved up to No. 6 – its best rank since the final week of the 2012 season – with its third-place finish at Wisconsin behind race winner and National Athlete of the Week Crystal Nelson and fifth-place Katy Moen. The Cyclones were third in the team standings without 2013 All-American Bethanie Brown.

Colorado remained No. 7 with its fourth-place showing at Pre-Nats while the subsequent pair of teams made their first top-10 appearances in some time.

No. 8 Wisconsin moved up eight spots from a week ago to its first top-10 rank since the final week of the 2008 season following its fourth-place finish at its home adidas Invitational. Sarah Disznza led the way for UW in 12th-place.

Finishing just behind the Badgers in fifth place were the No. 9 West Virginia Mountaineers, up 11 spots with its fifth-place showing at Wisco. Jillian Forsey was 11th overall at the front of the WVU pack. This marks WVU’s first time in the top 10 since the final week of the 2011 season.

Rounding out the top-10 were the New Mexico women, who finished sixth at Wisconsin with a very healthy 31-second spread between its No. 1 Charlotte Arter in 27th and its No. 5 in 74th.

Heading the other direction were a pair of traditional cross country powers in No. 11 Stanford and No. 12 Florida State. The Cardinal were down five positions following seventh- and eighth-place finishes at Wisconsin, respectively. For FSU, this is the first time outside the top 10 since week three of the 2009 season and its lowest since week two of 2007.

Making the biggest moves in the poll were the No. 14 Vanderbilt women – up 13 to their highest spot since week four of 2012 with a ninth-place showing at Wisconsin – and the No. 18 NC State women – up 11 to their best rank since the second week of the 2007 season with their fifth-place finish at Pre-Nats.

Headlining the new teams to the poll this week were No. 19 Ohio State, No. 25 Princeton, No. 27 Toledo and No. 29 UCLA. For Ohio State, this is its best rank in the USTFCCCA archives, and for Toledo this is the first appearance since the end of the 2012 season.

It wasn’t all good news for everyone, though. Twelve teams dropped multiple positions, including a 13-position slide to No. 30 for Boston College, a seven-position slide for No. 23 Boise State and a six-spot drop for No. 28 Baylor. Not to mention a drop out of the poll for former No. 19 William & Mary and three other teams.

Among those three other teams? The defending national champion Providence Friars, who finished 24th at Wisconsin. With the Friars now only receiving votes, each of the top three teams from last year’s NCAA Championships – Providence, Arizona and Butler – are now gone from the national top-30.