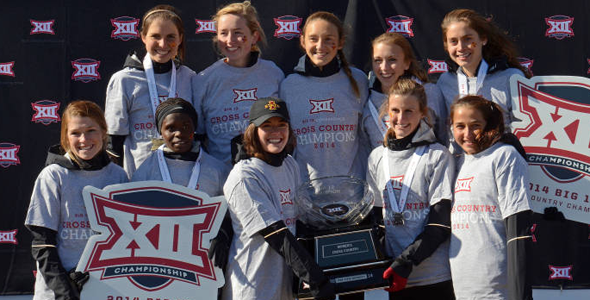 NEW ORLEANS – Round one of the NCAA Division I Cross Country championships season is in the books, with the results of conference championship meets reverberating throughout the second-to-last edition of the women’s National Coaches’ Poll released Tuesday by the U.S. Track & Field and Cross Country Coaches Association (USTFCCCA).

Dominant performances at the Big Ten Championships, Big East Championships and Pac-12 Championships kept the now-unanimous No. 1 Michigan State Spartans, No. 2 Georgetown Hoyas and No. 3 Oregon Ducks, respectively, atop the polls.

Big Ten winner Leah O’Connor led the way for the Spartans, who took three of the top four spots and five of the top 11 in Iowa City in a rout of new No. 6 Wisconsin and in-state rival No. 8 Michigan (which ran without 2013 Big Ten Champ Erin Finn). Their 26 points were the lowest of any Big Ten women’s winner since Wisconsin’s 25 in 1999.

Georgetown was even more dominant as individual champ Katrina Coogan led the Hoyas to seven of the top nine individual spots and a 19-point total. Oregon was similarly well represented at the head of the Pac-12 field with five top-15 finishers, boosted by the debut of transfer Waverly Neer in 10th-place.

From there on, however, throw the previous edition of the top-30 out the window: 24 of the next 27 teams checked in at a different position than the last polls following the Wisconsin adidas Invitational and Pre-National Invitational.

The Big Ten loss by the preseason favorite Finn-less Michigan dropped the Wolverines from No. 4 to No. 8, paving the way for several teams to move up to the best national rankings in recent times.

SEC Champion Arkansas moved up to No. 4 with a big, 32-85, win over No. 16 Vanderbilt. Dominique Scott won her second conference title in a row as teammate Grace Heymsfield joined her for the 1-2 sweep.

In at No. 5 was Big 12 Champ Iowa State, up to its highest rank since week three of the 2012 season. The Cyclones, led by decisive individual winner and national title frontrunner Crystal Nelson, scored a scant 29 points – the lowest in the Big 12 since Colorado’s 25 in 2004 (the last time the Buffaloes won the national title). All this without returning All-American Bethanie Brown, who is expected to return for NCAAs. Picking up the slack was individual runner-up Katy Moen, fourth-place Margaret Connelly and ninth-place frosh Erin Hooker.

Ranked its highest since week one of the 2007 season, the No. 6 Wisconsin Badgers moved up two spots after a runner-up showing at Big Tens, ahead of No. 8 Michigan, 55-93. UW’s individual runner-up Sarah Disanza challenged MSU’s O’Connor for the win, leading four Badgers in the top 12. As explained in the USTFCCCA weekend recap, Wisconsin performed so well that even with Finn hypothetically defending her Big Ten crown and everyone else in the field sliding down one spot, Michigan still would have finished approximately 10 points shy of Wisconsin.

No. 7 West Virginia, at its highest rank since entering the NCAA championships No. 7 in 2009 (it would finish sixth), performed similarly at the Big 12 meet, scored 58 points behind fifth-place Katie Gillespie and five scorers within the top 17. The Mountaineers’ No. 1 in their fifth-place showing at Wisconsin, Jillian Forsey, was just their No. 3 in 12th at Big 12s on Saturday.

Michigan dropped to No. 8, followed by Mountain West champion No. 9 New Mexico in the single digits for the first time this season, and the return of Stanford to the top 10 with its runner-up showing at Pac-12s.

Just missing the top 10 was No. 11 North Carolina, which moved up four spots to its highest poll position since 2004 with its dethroning of six-time-defending ACC Champ No. 13 Florida State, 57-99.

The biggest jump in the poll, however, came from the No. 17 Iona women – up to their highest rank since at least the beginning of the USTFCCCA archives in 1995. Behind the stellar debut of last year’s No. 3 national finisher Kate Avery, the Gaels won the MAAC Championship to skyrocket from the ranks of those teams receiving votes into the top-30 for the first time since week six of the 2006 season.

Other big moves around the country? No. 21 Baylor moved up seven spots from a week ago, following its third-place finish at Big 12s, while Darmouth moved up four into a tie at No. 22 with Syracuse with its Ivy League crown.

It wasn’t all good news Tuesday, though. No. 12 Colorado dropped five spots with its third-place effort at the Pac-12 Championships, the aforementioned Syracuse fell six positions with an eighth-place finish at ACCs, and No. 30 Villanova dropped six spots following a fourth-place showing at Big Easts.

Also returning to the poll was No. 29 Notre Dame with a fifth-place ACC finish.