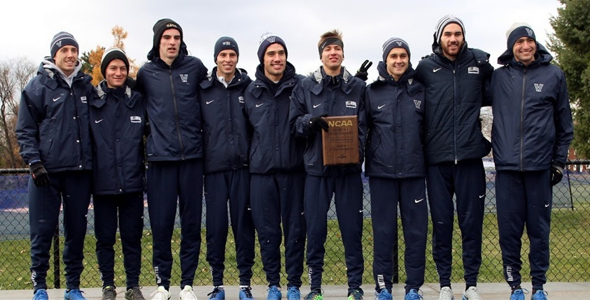 NEW ORLEANS—The final men’s cross country National Coaches’ Poll of 2014 had the same No. 1 team as every one that came before it: newly minted Mountain Region champs Colorado. Mark Wetmore’s Buffaloes are the second team in the last eighteen years to be unanimously ranked No. 1 for an entire season. (The last team to hold that honor, Wisconsin in 2006, lost to Colorado at nationals)

The NCAA Division I National Coaches’ Poll, released Monday by the U.S. Track & Field and Cross Country Coaches Association (USTFCCCA), considered both teams that qualified for NCAAs and those that didn’t.

Two top-five teams switched places and a third joined for the first time this season. No. 2 Syracuse and No. 3 Oregon traded ranks; that’s the highest rank for Syracuse in the eighteen years of Association polling archives and likely their highest rank ever.

After winning the Big East and Mid-Atlantic, No. 5 Villanova hit its highest ranking of the season and is positioned for its highest national finish in 22 years.

The Wildcats haven’t cracked the top five since they finished fourth in 1992.  That year, their top runner was current Arizona State head coach Louie Quintana and their No. 2 was BAA coach Terrence Mahon. (’92 was a coach-filled year. Current Oklahoma State boss Dave Smith was 51st for Michigan State, Oberlin coach Ray Appenheimer was 40th for Colgate, and Bowerman Track Club coach Jerry Schumacher was 32nd for Wisconsin)

Opinions about most of the teams are clearly malleable.  Other than Colorado, no one but No. 4 Oklahoma State, No. 6 Wisconsin, and No. 9 Stanford has been at their current ranking for more than two weeks.

Spots 11 through t13 were all occupied by teams on the upswing.  No. 11 Providence jumped eight spots to the Friars’ highest ranking since 2002; they were followed by No. 12 UCLA and Nos. t13 Georgetown and Virginia.  UCLA’s five-rank climb was the fourth largest in the poll, and the Cavaliers’ 15-rank northern migration was the largest of the week.

Providence moved up on the basis of finishing three points behind Syracuse and taking the Northeast’s second AQ, while Virginia was rewarded for a surprising win in the Southeast.

The second biggest mover of the poll was No. 17 Michigan State, who punched its ticket to Terre Haute by taking the second auto spot in the Great Lakes. It was a timely run for the Spartans, who may not have had enough points to qualify as an at-large team. They’re up ten slots in the rankings.

In addition to the No. 1 team, the Mountain Region provided some of the biggest shuffles of the week.  No. 22 Southern Utah made one of the biggest jumps, moving up eight after finishing just seven points behind No. 15 BYU.

UTEP received votes; the Miners were perhaps the least expected qualifier for nationals, getting pushed in by No. 26 New Mexico after beating the Lobos and finishing sixth at the Mountain Region meet.

Speaking of the Lobos, their 13-spot slide was the biggest in the men’s or women’s poll this week.

Four teams join or re-join the poll after qualifying for NCAAs.  No. 24 Mississippi has never been ranked in the 18-year history of the poll, and never qualified for nationals in the 75-year history of the meet.  Brian O’Neal’s Rebels checked off both boxes this week.

No. 27 Colorado State, No. 29 Eastern Kentucky, and No. 30 Texas all returned to the poll this week after being ranked earlier this season.

VIEW ALL RANKINGS BEYOND THE TOP 25