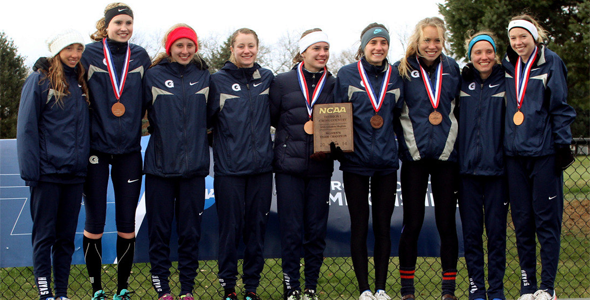 Georgetown enters as the No. 2 team in the country, looking to reclaim its 2011 national title. (Photo: Craig Houtz)

NEW ORLEANS – The college cross country world knows which women’s teams advanced from the regional championships into Saturday’s NCAA Division I Championships in Terre Haute, Indiana. With the Monday evening release of the final National Coaches’ Poll by the U.S. Track & Field and Cross Country Coaches Association (USTFCCCA), it now knows where everyone stands entering the meet.

And where everyone stands – at least in the top third of the poll – is in roughly the same spot as two weeks ago. Nine of the top 10 teams from the previous edition, most of whom were likely focused on just getting through regionals incident-free and well-rested, held firm.

The lone exception was Mountain champion No. 8 Colorado, which moved up four spots just ahead of the team it defeated for the title, No. 9 New Mexico.

Great Lakes champion Michigan State – going for its first-ever NCAA title in women’s cross country – will enter as the pre-meet favorite in the Coaches’ Poll, followed by Mid-Atlantic champ No. 2 Georgetown, West winner No. 3 Oregon, South Central champion No. 4 Arkansas and Midwest winner No. 5 Iowa State.

Both MSU and Georgetown are in their highest pre-NCAA Championships rank since at least 1995. Georgetown was No. 4 in the country before winning the 2011 national title with a team that included the Hoyas’ current top runner Katrina Coogan.

Five times in the past 11 years the No. 1 women’s team has gone on to win the team title. Providence won as a No. 1 just last year, but the two years before that? A pair of team in the hunt for another upset this year: Oregon won as the second-ranked team in 2012 and Georgetown was No. 4 before claiming the crown in 2011.

No. 6 Wisconsin and No. 7 West Virginia held steady after finishing runners-up in their respective Great Lakes and Mid-Atlantic regions.

In at Nos. 10 and 11 were a pair of teams who posted identical 103-point team scores at the West Regional, but are ranked in the order opposite the way the tie was broken. The stalemate broke in favor of No. 11 Boise State at regionals to finish runner-up and automatically earn the Broncos their first-ever team berth to NCAAs, but No. 10 Stanford got the slight nod in the National Coaches’ Poll.

The Broncos moved up 14 spots to No. 11 (a program-best dating back to at least 1995), marking the beginning of a lower-two-thirds of the poll that was every bit as changed as the top third was static.

South Region champ Vanderbilt moved up four spots to No. 12 after upsetting No. 13 Florida State. The Last time the Commodores were ranked higher was 2011 when they entered the meet No. 5 and finished sixth.

William and Mary made an even bigger splash, going from outside the top-30 and on the bubble entering the weekend to Southeast Region champion and No. 14 in the nation Monday. W&M was also No. 14 early in the 2013 season, but the last time the Tribe was ranked higher was 2002.

The Tribe moved just ahead of region runner-up North Carolina, which dropped four spots to No. 15.

Ravaged by injuries to their top runners, the preseason favorite Michigan Wolverines finished fourth at the Great Lakes meet to drop 10 spots to No. 18. With the hope of some key runners returning for NCAAs, UofM is still ranked ahead of the region’s third-place team, No. 21 Toledo. The Rockets moved up five spots and sit just ahead of in-state rival Ohio State at No. 22.

Despite running without their top returner from a year ago, the defending national champion No. 23 Providence Friars came through in a big way to finish runner-up in the Northeast Region behind No. 16 Iona (moved up one spot). The Friars had been outside the top 30 and on the bubble entering the weekend.

Top-30 teams from the pre-Regionals National Coaches’ Polls that weren’t so fortunate? Arizona State (formerly No. 24); Princeton (No. 28) and Villanova (No. 30) each failed to qualify for NCAAs.

VIEW ALL RANKINGS BEYOND THE TOP 25