EUGENE, Oregon – We covered Day One of the NCAA Division I Outdoor Track & Field Championships from the team perspective yesterday, but of course there’s much more to this meet than the team standings.

We’ve selected a few individual highlights from Day One, which was mostly men’s events with field event finals, track prelims and the 10,000 meters final – and the start of what has become a historic women’s heptathlon.

Check out the highlights below. 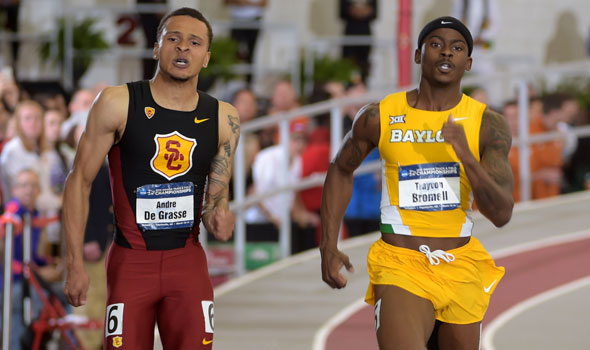 Anyone who thinks sprinting is simple should watch yesterday’s men’s 100 and 200 prelims.  In the 100, USC’s Andre De Grasse ran faster than anyone was running at any point in the race.  The only problem was, Baylor’s Trayvon Bromell had a great start and nearly perfect first two phases—meaning that by the time De Grasse ironed all the kinks out, Bromell was too far ahead. De Grasse might be the fastest kid on the playground, but Bromell was the better sprinter yesterday.

In fact, Bromell was the best sprinter that we’ve ever seen at his age.  Last year in the 100 final, Bromell broke the world junior record.  The sophomore turns twenty this year, so he’s no longer eligible for junior records.  But he’s still nineteen, and yesterday’s wind-legal 9.90 is the fastest time ever by a nineteen-year-old, beating Yohan Blake’s 9.93 from 2009. Ngoni Makusha’s collegiate record of 9.89 seconds is in serious danger.

Before the meet, Bromell was not exactly eager about the new schedule, saying “I like how it was last year…Competing against people at this high level, I just feel like they didn’t think about athletes and our bodies.” Well, if yesterday was any indication, Bromell can handle the load.  On Wednesday night, he ran three races—the 4×1, 100, and 200—in a span of two and a half hours.  In the last one, the 200, he displayed a Bolt-ian disdain for effort: he wasn’t leading off of the curve, and he completely eased up for the last six meters or so. He ran 20.03!  Just to be clear: Bromell basically sat and kicked in a 200, and cruised once he had his heat won, and still very nearly became the tenth collegian to break twenty seconds.  Friday night is going to be fantastic.  The 100 final is at 5:25 and the 200 is 45 minutes later at 6:10.  De Grasse (and Florida’s Dedric Dukes) are in the 4×1 final at 4:35; Bromell is not. 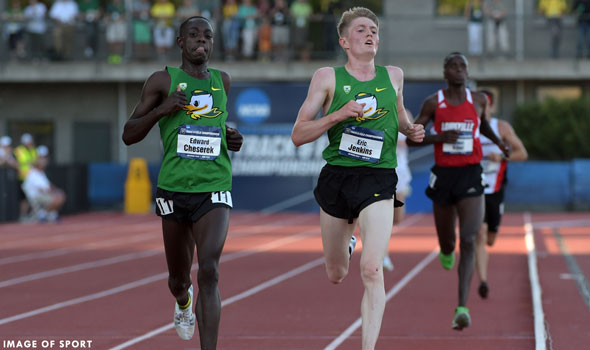 If Bromell was salty coming into the meet, then Eric Jenkins transported a mountain range of sodium chloride into the mixed zone yesterday.  After getting outkicked for the 10k win by Oregon teammate Ed Cheserek, Jenkins mentioned that they had originally planned on finishing together.  He claimed to not consider his runner-up finish a “real loss,” providing something that he and Ches have leeched out of collegiate distance running all year: drama.  For the first time since the days of Lawi Lalang, there’s real intrigue in the long distance races.  Yes, we still know that Ches and Jenkins are by far the two best 5k/10k runners in the NCAA.  But the rote automacity that has accompanied their titles this academic year is gone.  Jenkins wants to win that 5k.

As for the race itself…well, that was pretty bland.  There was a fantastic brass/percussion section playing next to the track—an improvement over last year’s excellent orchestra at World Juniors.  And that was about the most exciting thing about the race.  Craig Lutz of Texas and Jason Winn of BYU were game, but Jenkins’s last 800 meters was like a vise grip that squeezed the speed out of everyone but Cheserek.

Keeping Up With Akela Jones 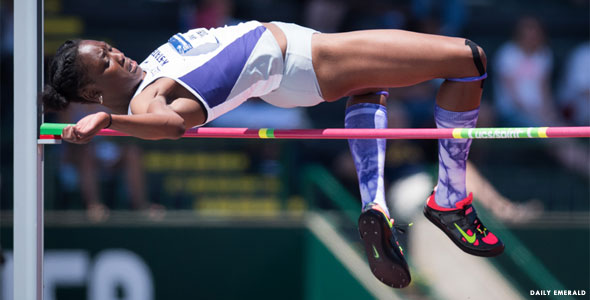 While the bulk of the action on Day 2 at the NCAA Championships – the first-ever women’s semifinals-only day – begins mid-afternoon Pacific time, there may not be a more exciting and historic event all day than the conclusion of the women’s heptathlon.

Here’s where we stand as the hept enters its final three events at 3pm ET/noon PT: defending national champion Kendell Williams of Georgia and reigning SEC champion Erica Bougard of Mississippi State – who beat Williams head-to-head last month – are on pace to score well over 6000 points, as is Williams’ teammate Quintunya Chapman and 2013 champion Lindsay Vollmer of Kansas.

They all also find themselves with a very steep uphill climb to catch leader Akela Jones of Kansas State, who became the first collegian in history to score more than 4000 points in the first day of a heptathlon. She posted an astounding 4023 points to top the former Day One record of 3942 held by – you may have heard of her – Jackie Joyner Kersee in 1985. (Thanks to combined events guru Frank Zarnowski for the info).

All of this means that Day Two is going to be historic. According to our USTFCCCA NCAA Division I Outdoor T&F Championships History Record Book, the mark for most 6000+ point scorers in one NCAA Championships currently stands at two from Vollmer’s win in 2013.

We’ve added together this year’s leaders actual Day One scores with their career bests in their Day Two events and found that five women have a legitimate shot at breaking the 6000+ barrier today, with another group of three or four knocking on the door. We’ve laid those scores out below, but take particular note of Jones, who could potentially overtake Oregon legend Brianne Theisen (Eaton) for the No. 2 spot on thea ll-time collegiate performers list.

Check The Sky for Marquis Dendy 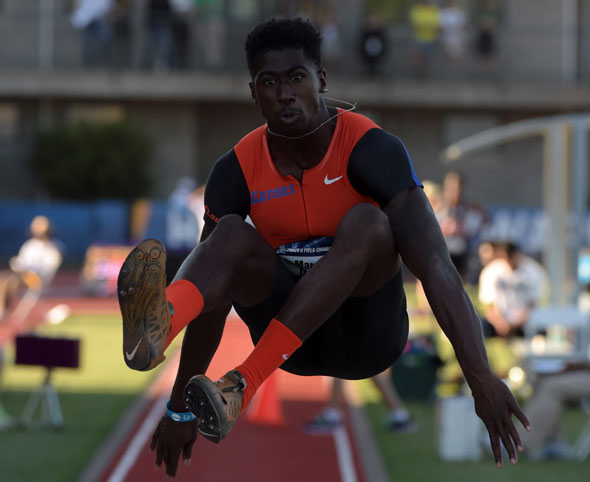 Marquis Dendy of Florida may have won national title No. 6 on Wednesday with a long jump victory, but these titles – especially in the long jump – aren’t getting any easier for him.

His winning leap of 27-8w (8.43m, +2.3m/s) came in the third of six rounds and he added a pair of 27+ feet jumps in rounds four and five, but just like indoors, he had to watch nervously as his nearest competitors went out swinging in the final round.

Arkansas’ State Roelf Pienaar moved to third with a leap of 26-3½ (8.01m), but it was former indoor champion Jarrion Lawson of Arkansas who provided the biggest scare. The Razorback was ecstatic as he exited the pit following a huge leap, one that ultimately measured 27-4½ (8.34m) – but with a tailwind 2m/s weaker than Dendy’s winning jump. Throw some equal wind into the mix, and we’re looking at a redux of indoors this season when Lawson missed Dendy by one measly centimeter on his final attempt.

But that was not to be, and Dendy took the win with the fourth-farthest jump in meet history under all conditions. He will go for the long/triple jump sweep on Friday.  He will look to join Mike Conley of Arkansas as the only man to sweep the long jump/triple jump at three consecutive NCAA Championships (outdoor and indoor). Conley swept both the indoor/outdoor titles in both 1984 and 1985. 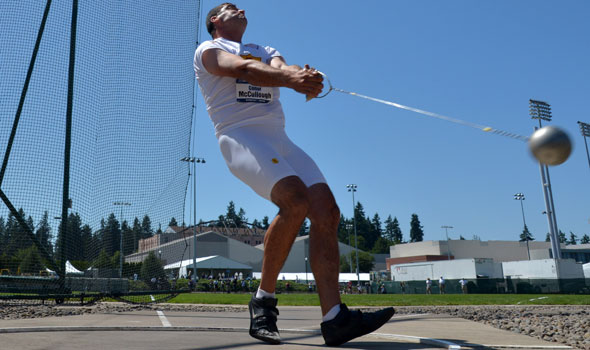 This one has been a long time coming for Southern California’s Conor McCullough. In his sixth and final year of eligibility, the former Princeton standout finally captured his first NCAA title with a victory in the hammer throw.

The top weight thrower and hammer thrower of the 2012 regular seasons, McCullough sealed the deal with a massive heave of 252-4 (76.91m) in the third round, moving him to the No. 5 spot on the all-time NCAA Championships performers list (he came up four inches short of moving up to No. 6 on the all-time collegiate list).

After his biggest competition on paper in Michael Lihrman of Wisconsin – who denied him the indoor weight throw title in the final round – failed to advance to the finals, the road was wide open for the Trojan senior. He notched the four best throws of the competition, defeating defending national champion Matthias Tayala of Kent State by more than five meters (or nearly 20 feet). 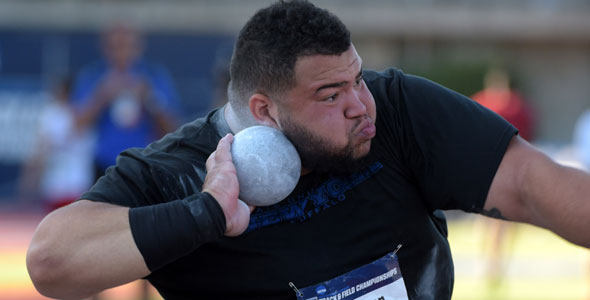 The biggest upset of day one came in the shot put ring.  Buffalo’s Jon Jones beat defending indoor champ Stipe Zunic of Florida, two-time defending outdoor champ Ryan Crouser of Texas, and the rest of the field for his first NCAA title.  After one day of the NCAA meet, the Pac-12 has three titles, the MAC has two (Jones and Shawn Barber), and the SEC has one.  Jones is also the second Division III transfer to win a Division I title this season—Mike Lihrman started his collegiate career at UW-Stout, and Jones started his career at Buffalo State.

Lots of upsets are functions of the favorites underperforming. Not this one. Jones launched the shot 20.78 meters (68-2¼), which would have won seven of the last nine NCAA meets. In a somewhat unusual result, Jones’s best throw was his second, but he won the meet on his first.  Jones and Darrell Hill of Penn State both threw 20.78, but Jones got the win on the strength of his second best throw of 20.31m—just four centimeters better than Hill’s second best 20.27 meters.  That’s how close the shot was.  On four throws totaling more than 260 feet, the two best guys were separated by less than two inches.