That’s why the “Women in Coaching Event” has grown every year it has been held at the USTFCCCA Convention.

This year was the sixth installment of the expanding event, which gives female coaches a platform to discuss important issues they face in the coaching profession.

“Narrowing down what we talk about is one of the challenges we face,” said event coordinator Rhonda Riley, who is the head women’s cross country coach and assistant track & field coach at Duke University. “We know from the past that the women who attend the panel want the speakers to get more in-depth when it comes to those issues and to share about their experiences tackling those issues.” 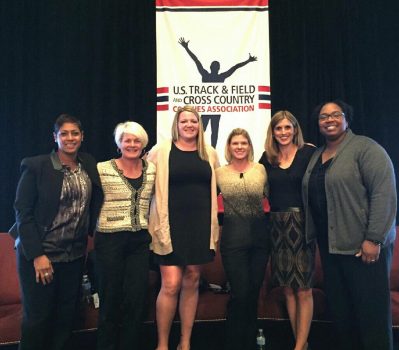 Members of the panel pose for a picture after the event. From left to right: Caryl Smith Gilbert, Amy Deem, Bambi Brundage, Rhonda Riley, Sara Slattery and Makiba Batten (Photo by Craig Macaluso).

“We had an amazing representation of great females in this profession,” Riley said. “We’ve covered event groups, different divisions, motherhood, being an administrator – you name it. Our goal was to try to really expand the panel, their knowledge and bring it to the audience.”

That was by design.

“The audience and the females here are anything from a female volunteer coach to a veteran coach,” Riley said. “We just try to touch on everybody’s experience on the panel and make it relevant for the audience so they can go away from this afternoon and really take something away from it that they can bring to their coaching and their lives.”

“It’s been great to see the growth from Year 1 to now,” Riley said. “I love getting feedback from the women and how they tell me they look forward to this every year, because they enjoy networking and learning. It’s really rewarding to try to improve this event every year.”