QUICK LINKS: CLICK HERE FOR RESULTS FROM THE MEET
FROM THE INFOZONE: National Championships Central

Men’s and women’s champions were crowned in 21 events as well as in the all-important team race.

Keep reading below to see what happened at the biggest meet of the season.

Once UW-Eau Claire and Loras – Ahem, Gabrielle Noland – got rolling, there was no stopping either of them as they captured their first outdoor national team titles in program history.

We’ll start with the Blugolds, who entered the meet as the projected favorite according to the Pre-Championships Edition of the National Rating Index by a comfortable margin. Our formula deduced that UW-Eau Claire’s depth would be too much for any other men’s team to overcome. 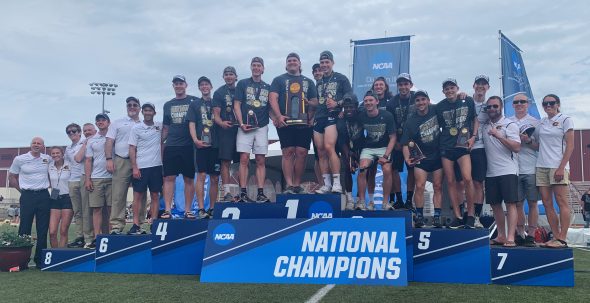 MIT finished runner-up in the race for the men’s team title with 38 points thanks to some big efforts in the field events, while Mount Union and UW-Oshkosh rounded out the final two podium spots with 36 points and 32 points, respectively. 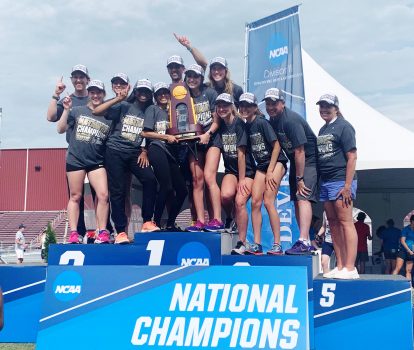 When it comes to the Duhawks, everything had to fall into place for them to make the most out of their opportunities. Loras only had nine entries to work with, so there was a small margin for error.

It’s safe the say the cosmos aligned for the Duhawks, as their star (Noland) showed the way.

Noland scored 23 points on the final day of the meet behind a sweep of the short sprints, anchoring Loras to its first 4×100 relay title in program history and a first-leg carry of the seventh-place 4×400 relay team. She became just the second woman since 2005 to win the 100 and 200 at the same NCAA DIII outdoor championship meet.

Here’s some more history for you about Noland (You can also read it a little further down): Her time in the 100 of 11.47 (+2.4) was the fastest all-conditions winning mark in meet history, while her wind-legal victory in the 200 of 23.44 broke the meet record and gave her the second fastest mark in NCAA DIII history.

Noland didn’t do it ALL, though: Kassie Rosenbum won the 10,000 on Thursday night and finished sixth in the 5000 on Sautrday, Bella Solis finished runner-up in the 400 Meter Hurdles and each of those additional members of the aforementioned relay teams shined.

Washington (Mo.) finished runner-up in the race for the women’s team title with 49 points, while George Fox and Johns Hopkins tied for the final podium spot with 36 points.

Have Yourself A Day, Gabrielle Noland!

There was no stopping Gabrielle Noland on the final day of the meet.

Noland, a junior from Loras, DOMINATED the short sprints.

(We’re not taking it lightly, as you can see by our use of capital letters)

Noland got things started with anchoring the Duhawks to their first 4×100 relay title in program history, then returned to the track for her two individual events – the open 100 and the 200.

The competition didn’t stand a chance as Noland became the first woman to sweep the short sprint titles since Carly Fehler of UW-Eau Claire in 2015. She won the 100 in 11.47 (+2.4) which is the fastest all-conditions victory in meet history and then doubled down with a wind-legal 23.44 to break the meet record and notch the second fastest time in NCAA DIII history.

Annie, Get Your History

It’s not easy to double in the steeplechase and 5000 on the same day.

It gets 1 million times harder if an athlete wants to win each event.

It takes a whole lot of grit, talent and some Wolverine-like regeneration abilities.

Well, Annie Rodenfels was up to the task and became just the second woman in NCAA DIII history to win the steeplechase and 5000 at the same NCAA DIII outdoor championship meet. Shauneen Garrahan of Amherst was the first back in 2007.

Rodenfels kicked things off with a victory in the steeplechase, an event in which she set the NCAA DIII record earlier this season. She won that event title by 18 seconds over Tasha Freed of Johns Hopkins.

A few hours later, Rodenfels showed her strength and pulled away late to a commanding victory in the 5000. She won by 12 seconds over Elise Ramirez of SUNY Geneseo.

Osei, Can You See The Title?

Dilys Osei of Emory won an incredible race for the individual title in the Women’s 400 Meter Hurdles.

Osei trailed Bella Solis of Loras with about 75 meters to go before getting right on her shoulder on the homestretch. The two put everything they had into the final kick and eventually it was Osei who crossed the finish line first in front of a diving Solis by 0.02 seconds – 58.98 to 59.02.

Put The Womack On ‘Em

Davonta Womack of Bridgewater College entered the weekend tied for sixth on the Descending Order List in the 100 Meters at 10.54, a mark he established on May 1.

Well, Womack got a whole lot faster in 24 days.

Call it the “Championships Season Effect.”

Womack lowered his PR to 10.50 (+1.6) in the prelims and then scorched the track to the wind-assisted tune of 10.20 (+2.7) in the final to win the individual title. He put himself in elite company with that winning mark, as it is the second fastest all-conditions clocking in meet history behind a wind-legal 10.19 that recent USTFCCCA NCAA Division III Track & Field Athlete Hall of Fame inductee Chaz Clemons ran back in 2002.

To The Top Of The Mount (Union)

When you combine those two facts, Plant and Troyer – who both run for Mount Union – become only the fourth set of teammates in NCAA DIII history to win titles in the event in back-to-back years.

Jayci Andrews of Bridgewater State completed the indoor-outdoor sweep of the sprint hurdles.

Andrews, who won the 60 Meter Hurdles indoors, grabbed the 100 Meter Hurdles title on Saturday in 13.66 (+2.4), the third fastest mark in meet history.

There’s A First Time For Everything

The Loras women and the Saint John’s (Minn.) men, with standout sprinters Gabrielle Noland and Ryan Miller on the anchor leg, respectively, proved to be the fastest quartet to split one lap.

Both Noland and Miller trailed when they got the baton, but their top-of-the-division speed allowed them to come from behind for the victory.

Will Daniels of Central College completed the indoor-outdoor sweep in the multi as he won the decathlon on Friday. He also won the heptathlon at the indoor meet back in March to earn back-to-back crowns in that event.

David Kornack of UW-Eau Claire continued his dominance in the shot put today.

Kornack, a senior from Edgar, Wisconsin, became the third Blugold male athlete in the past five years to win the shot put. He joined Roger Steen in 2015 and Alex Mees the following year.

Not only that, but Kornack put together another all-time series. All four of his recorded marks went 18.73m (61-5½) or farther, which included his winning heave of 19.32m (63-4¾). Each of those throws landed in the top-10 in meet history and that 63-footer made Kornack just the second man in NCAA DIII history to put three career throws past that distance.

Just take a look at this last attempt from Kornack.

David Kornack of @UWECblugolds LET. IT. FLY on his last attempt of the meet, but was called for a foul.

This one had @NCAADIII record written all over it, if he was able to stay inside the circle. pic.twitter.com/nfYTxpFVgW

Talk about wanting to end your collegiate career with a bang!

Soaring To An All-Time Best

Hayden Snow of John Carroll made (windy) history on Thursday.

Snow, a junior from Sandusky, Ohio, took advantage of a strong breeze at his back on his first attempt in the long jump and flew 7.97m (26-1¾) to set the all-conditions, all-time NCAA DIII best!

That mark from Snow was marginally better than the current NCAA DIII record of 7.96m (26-1½), set by Shawn Watson back in 1996. Since Snow had a wind greater than 2.0 m/s at his back, it won’t count as the official record and is referred to as an all-conditions, all-time best.

Being on top of the podium at NCAAs isn’t new to Snow, who won the indoor title in the same event.

All The Titans Do Is Win

No women’s program has been more successful historically at the NCAA DIII Outdoor Championships than UW-Oshkosh.

Lauren Wrensch put an exclamation point at the end of that sentence yesterday.

By winning the long jump yesterday, Wrensch added to an already staggering total of individual & relay titles won by the Titans since 1982. That number is now 50!

No other women’s program has more than 30.

PRE-MEET COVERAGE
Click here to see what we wrote about before the meet started on Thursday, including a list of returning champions and more.

This is the second time in the past three years that the NCAA Division III Outdoor Track & Field Championships will be held at the SPIRE Institute.

Just two years ago, team titles went to the UW-La Crosse men and the Washington (Mo.) women. The Eagles held off rival UW-Whitewater by two points thanks to strong performances by Ross Denham and Luke Rohloff, while the Bears cruised to their first outdoor national title in program history by a comfortable 19-point margin despite only having one individual champion (Rebecca Ridderhoff in the 400 Meter Hurdles).

Fresh Faces Will Top The Podium

Only eight of 38 possible individual champions from 2018 return to defend their titles this year.