It was initially called a flop, but in reality, Dick Fosbury had a huge hit.

The Oregon State high jumper became a star in 1968, riding his revolutionary style all the way to an Olympic gold medal and being recognized as one of the world’s best-known athletes.

The sensation was a new style of clearing the high jump bar that he developed in 1963 as a high school sophomore. Instead of using a straddle or roll technique, Fosbury went over the bar backwards. In 1964 his hometown newspaper, the Medford (Oregon) Mail Tribune, captioned a photo of him as “Fosbury Flops Over the Bar” and a story described his technique as like “a fish flopping into a boat.”

The radical style wasn’t an immediate success with everyone. Fosbury’s coach at Oregon State – USTFCCCA Hall of Famer Berny Wagner – had him working on a conventional method in practice, while allowing the flop in freshman meets. That changed in Fosbury’s sophomore year of 1967 when he opened up by clearing a school record 6-10 (2.08m).

“After the meet, Berny came up to me and said, ‘That’s enough,’” Fosbury recalled to Brad Fuqua of the Corvallis (Oregon) Gazette-Times in 2014. “That was the end of Plan A, on to Plan B.”

Then came Mexico City and true world debut of the Fosbury Flop. The crowd of 80,000 was captivated, loudly cheering Fosbury’s clearances. “Only a triple somersault off a flying trapeze with no net below could be more thrilling,” one German reporter told Jon Hendershott of Track & Field News.

Fosbury, who had raised his PR to 7-3 (2.21m) at the Final Olympic Trials, had first-attempt clearances through a PR 2.22m (7-3¼), his third Olympic record height. He and fellow American Ed Caruthers – 1967 NCAA runner-up for Arizona – were the only ones left as the bar went to 2.24m (7-4¼) and the marathon runners were entering the stadium for their finish.

Only Fosbury was able to clear it – surpassing the American record of 2.23m (7-3¾) set in 1960 by Thomas. Fellow Oregonian Kenny Moore had just entered the stadium as the first American marathoner and “threw his arms in the air, danced a jig step and shouted congratulations to Dick. The crowd roared with delight at the antics of the two young Americans,” wrote Hendershott.

Today it is estimated that 99% of high jumpers worldwide use the flop style. 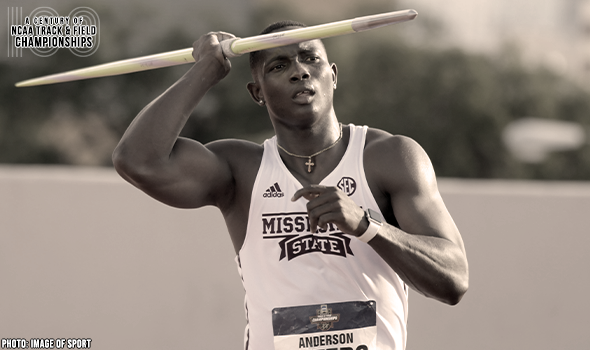 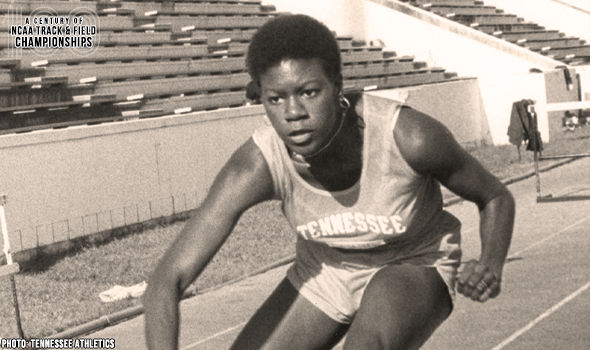 Fitzgerald Hurdled Into The Record Books

Benita Fitzgerald won back-to-back 100H titles at the NCAA Division I Outdoor Track & Field Championships in 1982 & 1983, setting a collegiate record and meet record with her time of 12.84 in 1983. 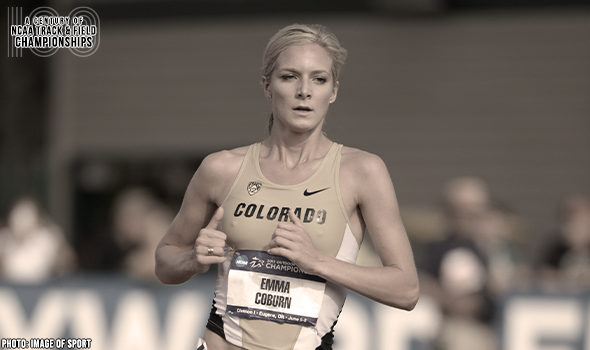 Coburn Picked Up Where She Left Off

Emma Coburn won two steeplechase titles at the NCAA Division I Outdoor Track & Field Championships, once in 2011 and then again in 2013. 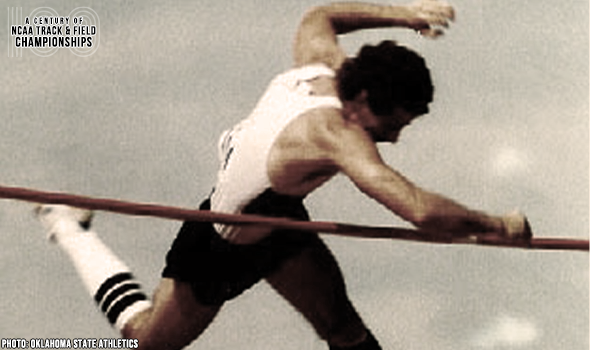 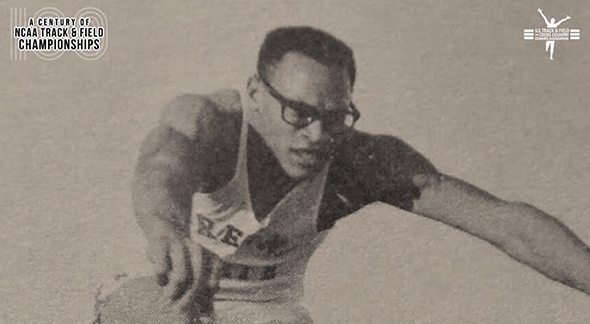 Charlie Craig won the triple jump at the 1964 NCAA Division I Outdoor Track & Field Championships. Then, after a long coaching career, he was inducted into the USTFCCCA Coaches Hall of Fame! 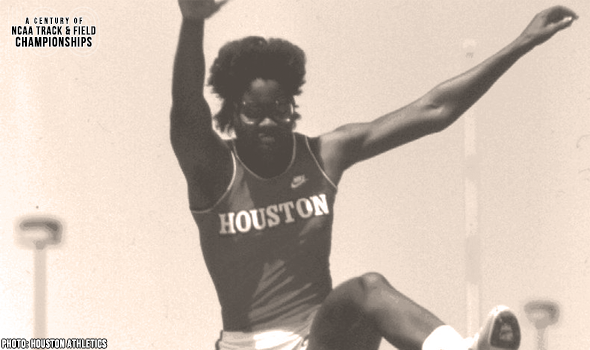 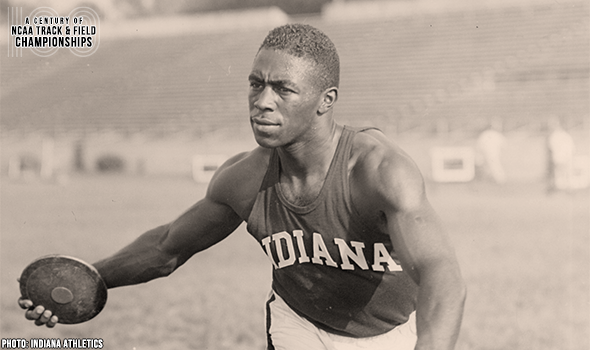 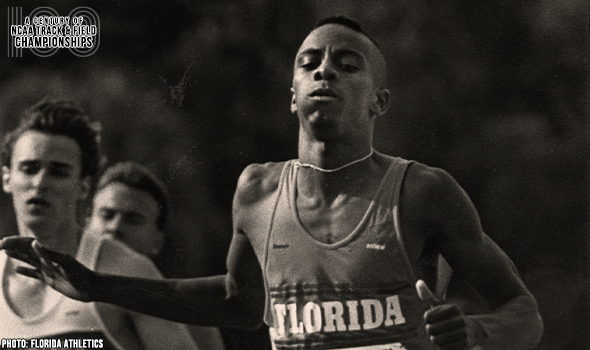 Two Laps To Glory For Everett 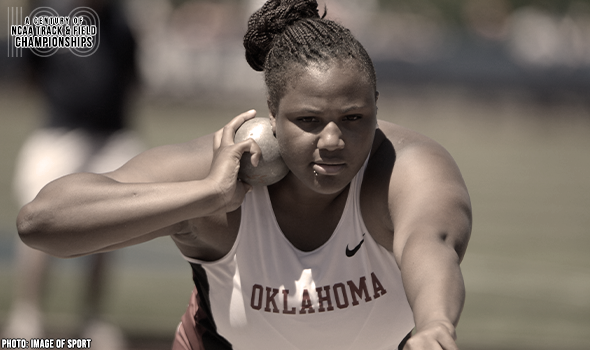 Tia Brooks won back-to-back shot put titles at the NCAA Division I Outdoor Track & Field Championships and broke the collegiate indoor record in the event in 2013. 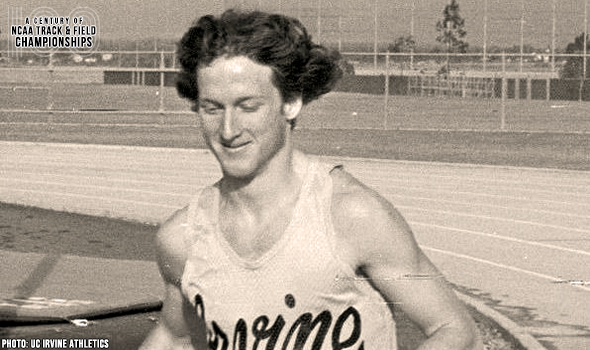 Scott One-Upped Himself In 1978

Steve Scott of UC Irvine won the 1500-meter title at the 1978 NCAA Division I Outdoor Track & Field Championships, one year after finishing runner-up at the same meet as an NCAA Division II athlete.