Colorado Continues its Streak as Unanimous No. 1 in Final Regular Season Coaches’ Poll 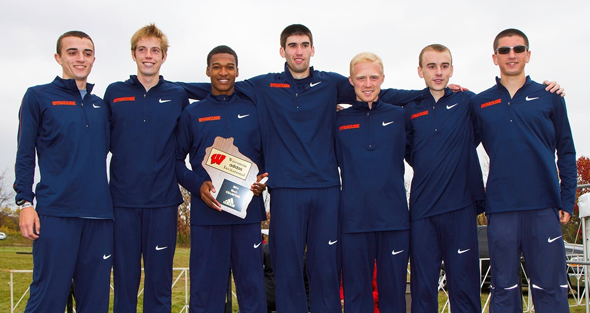 NEW ORLEANS—One top-three team in the men’s NCAA Division I National Coaches’ Poll is primed for its highest national finish in 60 years, while another showed this weekend that it’s ready for a stay at the top that may just feel that long.

The poll, released Tuesday by U.S. Track & Field and Cross Country Coaches Association (USTFCCCA), is the final of the regular season. The women’s poll was also released Tuesday.

There will two more polls prior to the NCAA Championships November 22 in Terre Haute, Indiana: after the Halloween-weekend conference championships, and after regionals two weeks later.

After Syracuse‘s dominant performance at Wisconsin on Friday—every other team in the field but one scored more than twice as many points as the Orange—it moved up three spots to No. 3 in the poll.

For ‘Cuse, last year’s 10th place was the first time it cracked the top ten at nationals since taking fourth in 1957. Should the Orange run to its rank at NCAAs, it would be its highest NCAA finish since taking second in 1954. (Winner Oklahoma State was known as Oklahoma A&M then, and Beloit and Grinnell both finished in the top 15).

That lone team to not get doubled up by the Orange at Wisco was No. 5 Iona, up nine spots to its highest ranking in two years.  Coach Ricardo Santos’ Gaels appear to have regained their 2005-08 form, when they finished fourth, third, second, and second at NCAAs, respectively.

Those finishes were under the direction of Mick Byrne, who’s now the head coach at No. 6 Wisconsin.  The Badgers climbed three ranks after a surprisingly strong third-place finish at their home meet.

No. 1 Colorado has received every first place vote in every poll this season, and after its dominant performance at Pre-Nationals—it scored a quarter of the points of every other team in the field save one— that trend continued. Only one team in the eighteen years of Association polling archives was a unanimous No. 1 for the entire season: Wisconsin in 2006.

Famously, the Badgers lost to Colorado at nationals that year.

Even scarier than the Buffs’ dominance on Saturday is that they did it without Morgan Pearson, who has yet to compete in a CU uniform in 2014 and could end up redshirted for a potential 2015 threepeat attempt.

Let’s not get too far ahead of ourselves: before defending their national title, the Buffaloes have to defend their Pac-12 title against No. 2 Oregon, who was the lone team to not quadruple Colorado’s score in Terre Haute this weekend. (The Buffs still put six runners ahead of the Ducks’ No. 3 man)

The gains described above came mostly at the expense of four western teams: Nos. 8-11 Portland, Stanford, Northern Arizona, and UCLA, who dipped a combined 14 places in the poll after lackluster showings in Madison.

That combined fall was nearly matched by one team, No. 12 Washington, which jumped 13 slots in the poll to its highest rank since at least 1997.  Even more crucially, the Huskies picked up a projected three at-large wins in Wisconsin, which are tremendously useful to have in your back pocket in a brutal West Region. Though it’s No. 12 in the nation, UW is still only No. 5 in the West.

The Georgetown Hoyas didn’t make NCAAs last year, and after sneaking into the preseason poll at No. 29, hadn’t been ranked all season.  After beating four ranked teams by over a hundred points each at Pre-Nats, they shot all the way up to No. 16 in the poll.

One of those four ranked teams was No. 21 Furman.  For the third straight week, the Paladins have their highest ranking ever; vitally, they’ve leapfrogged Eastern Kentucky (dropping out of the national poll) for that auto-qualifying No. 2 spot in the Southeast.

They’re sandwiched in the poll by two Big Ten teams on the rise after strong adidas Invite races: No. 20 Indiana is up three spots, while No. 22 Michigan State returns to the poll after a week away. (There’s a mark of a truly great regular season meet: you can finish 14th and 15th and move up in the rankings)

Mississippi finished 34 points behind No. 29 Texas at Pre-Nats. For the first time in at least seventeen years, the Rebels are receiving votes nationally.

This is the final regular-season poll of 2014.  The next national rankings will be released two weeks from today, after conference championships have concluded.