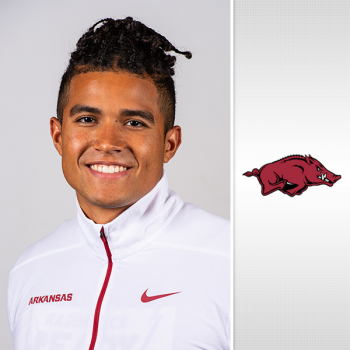 Ayden Owens was named the National Men’s Field Athlete of the Year. Owens, who hails from Pittsburgh, Pennsylvania, starred in the heptathlon this season. He notched a pair of all-time top-5 performances this season, both in come-from-behind victories over Kyle Garland of Georgia, who is the fifth-best performer on the all-time chart himself. Owens’ most recent brush with drama came at the NCAA DI Indoor Track & Field Championships, where he went from fourth to first in the span of 2 minutes, 31.55 seconds, a mark that he used to cross the finish line first in the 1000 meters. Owens had to beat Garland by at least 13.5 seconds to win the NCAA title and did just that with a four-second PR over 1000m. That gave Owens the fifth-best total in collegiate history, which was only topped by his PR of 6272 from the Razorback Team Invitational that put him second on the all-time chart behind 2010 The Bowerman winner Ashton Eaton.