NEW ORLEANS – The U.S. Track & Field and Cross Country Coaches Association (USTFCCCA) announced on Wednesday that NCAA Division I Cross Country Champions Lawi Lalang of Arizona and Sheila Reid of Villanova were named as National Athletes of the Year for the 2011 cross country season. In addition, Wisconsin’s Mick Byrne was named the Bill Dellinger National Men’s Coach of the Year while Georgetown’s Chris Miltenberg was recognized as the Peter Tegen National Women’s Coach of the Year.

Lalang, a freshman from Eldoret, Kenya, won the individual men’s title at the NCAA Championships on Monday. Lalang took the lead at the 4k mark of the ten-kilometer race and never looked back. Lalang would go on to win the race by 13 seconds in a time of 28:44.1.

Lalang went six-for-six in races this fall, averaging a margin of victory of 20.5 seconds. Lalang took titles at Wisconsin’s adidas meet and Roy Griak Invitational, setting course records at both. Lalang also was the Pac-12 Champion this season where he set another course record with an eight-second victory.

Past National Male Athletes of the Year

Reid, a senior from Newmarket, Ontario, won her second-straight national cross country crown on Monday, leading the Wildcats to a third-place team finish. In one of the best finishes in recent memory, Reid had to compete with a lead pack of eight runners heading into the final 500-meter stretch. Reid and Oregon’s Jordan Hasay separated from the group and ran side-by-side until the final 100 meters where she out sprinted Hasay to take the crown in 19:41.2.

Reid is the fifth in NCAA history to win back-to-back individual crowns.

Past National Female Athletes of the Year

For Wisconsin, it was their first national team title since 2005.

Byrne’s Badgers also won the NCAA Great Lakes title for the tenth-straight year this season. Wisconsin won with 50 points, placing their five scorers in an 8-9-10-11-12 bunch to nearest challenger Indiana’s 70. Wisconsin also won their 13th-straight Big Ten title this fall and is the No. 1 team in the country heading into the NCAA Championships.

Byrne is in his fourth year at the helm at Wisconsin.

The Georgetown women’s team won the NCAA crown for the first time in school history, tallying 162 points to hold off a tightly-packed bunch that included runner-up Washington (170), third-place and two-time defending champion Villanova (181), and No. 1-ranked Florida State (189). Georgetown’s eight-point margin of victory is the lowest since 2003 when Stanford’s 120 points edged out BYU with 128.

Earlier in the season, Georgetown tied with Villanova for the NCAA Mid-Atlantic Regional crown and finished third in the Big East Championships.

Miltenberg is in his fourth year at Georgetown. 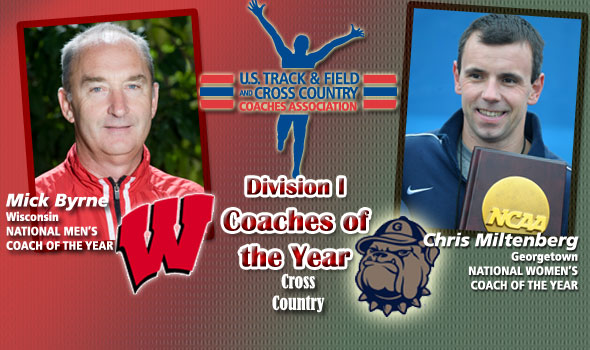