NEW ORLEANS – The U.S. Track & Field and Cross Country Coaches Association (USTFCCCA) announced on Tuesday that NCAA Division II Cross Country Champions Ryan Haebe of Western State and Neely Spence of Shippensburg were named as National Athletes of the Year for the 2011 cross country season. In addition, Western State’s Jennifer Michel was recognized as the National Men’s Coach of the Year while Tracy Hellman of Augustana (S.D.) was named the National Women’s Coach of the Year.

Haebe became the first individual national champion for the Mountaineer men since 2001, and only the second student-athlete in Western State history to win a men’s cross country national championship. Michael Aish won national titles in 1999 and 2001.

Earlier in the fall, Haebe placed fourth in the RMAC Championships, helping the team to the conference title. Haebe did not participate in the NCAA Central Regional.

Spence, a senior from Shippensburg, Pa., won her second-consecutive Division II national championship with a 13-second victory over the field and a 6K time of 20:53. Spence led for the majority of the race, gradually expanding her lead as the runners staggered through the frozen tundra.

Earlier in the season, Spence captured her fourth-straight Atlantic Region crown and won the region this season by nearly a full minute with a 20:43 performance in the 6k. Spence also became the first in PSAC history to win four-straight league cross country crowns.

For Michel, in her fifth year at the helm, Western State won their first RMAC title since 2004 and placed second in the NCAA Central Regional.

Hellman’s squad won their first NCAA title in women’s cross country with a 75-79 victory over nearest challenger Western State. Entering the meet as the No. 5 team in the nation, the Vikings stuck to the plan and stuck together as the scoring crew of five would earn overall places of 12, 13, 15, 17, and 29. Junior Leah Hansen led the group, followed by sophomore Runa Falch, sophomore Kristin Brondbo, junior Kyle Blakeslee, and senior Kelly Kougl.

The Vikings earlier in the season won their fifth-straight conference meet as they took the NSIC title. They were third in the NCAA Central Regional.

Hellman is in his 11th year with the team. 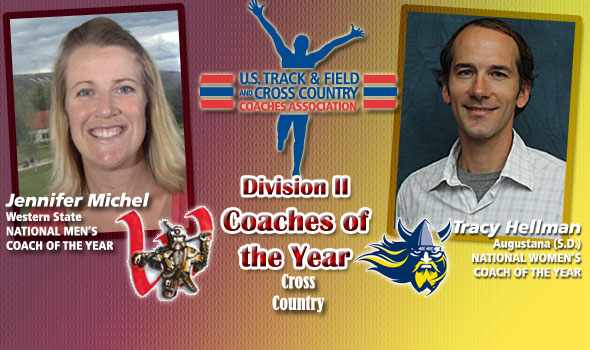