What if we told you the most dominant distance runner in the NCAA system over the past two years might not attend a university inside the contiguous United States?

What if we told you that same athlete, who just obliterated a divisional record that had stood for nearly 31 years, didn’t truly start running regularly until one year before she arrived on campus?

Let us introduce you to Caroline Kurgat, a senior at NCAA Division II Alaska Anchorage. 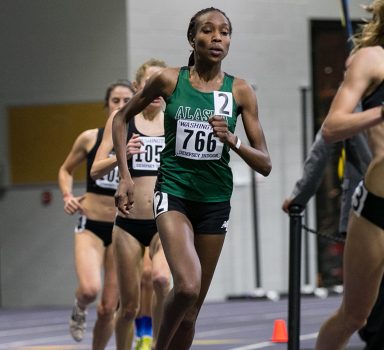 Alaska Anchorage’s Caroline Kurgat competes in the 5000 at the UW Invitational during this past indoor season (Photo Courtesy: UAA Athletics)

Since the start of the 2017-18 academic year, Kurgat is 11-1 in championship races as an individual, with her lone loss coming at the 2018 GNAC Outdoor Track & Field Championships when she placed runner-up in the 1500 by 0.11 seconds. When Kurgat does win – and it seems routine by now – she wins by a lot: Try an average margin of victory by 32 seconds.

OK. OK. You’re probably still focused on what you read three paragraphs ago. You know, how she wasn’t really a runner until she found out she had extended family vouch for her more than 8100 miles away from Eldoret, Kenya, where she calls home.

“We have to do a little bit of vetting and have a lot – I mean, a lot – of trust as coaches,” said Michael Friess, who’s in the midst of his 29th season as head coach of the cross country and track & field programs at the University of Alaska Anchorage. “A lot of these athletes we get don’t have a lot of history, so it comes down to us learning about them from family members in the area.”

Friess quickly realized he had nothing to worry about with Kurgat.

“From our first conversation, I could tell she was a very driven individual with some big goals,” Friess said. “I knew she wanted to be in the nursing program, which is pretty competitive here, so I knew she wasn’t going to take her opportunity lightly.

“And with her focus on academics, it helped us shape her into the athlete she is today, because being in the nursing program here, there are certain classes that she has to take that are only offered certain semesters or fill too quickly. So we wanted to make sure her eligibility went through all of her years in that program, for the most part, which allowed us to use a redshirt and have her build a base when the academic workload increased.”

Patience and perseverance paid off in a major way for Kurgat and the Seawolves.

That PR in the 10K is the most recent – and arguably, most meaningful – as it happened this past weekend at the Stanford Invitational and shattered a near 31-year-old NCAA DII record. That old standard of 32:28.57, set by Cal State LA’s Sylvia Mosqueda in 1988, also doubled as the meet record at the NCAA DI Championships until last year when six women went under it.

Here’s the kicker: Kurgat wasn’t even 100% in Palo Alto, California.

“Up until Wednesday, we wondered whether or not we’d race her,” Friess said. “She had flu-like symptoms and even she was thinking that she probably couldn’t go. But she started feeling a bit better, so we decided to go through with it and fortunately, races at Stanford are always polite and competitive. It’s a hard steady effort where she could lock into a pack and go with them.”

With that record and strong performance in her pocket, Kurgat has eyes on another.

“The longer we’ve been around each other, the more we trust each other and it seems like we can kind of read each other’s minds” Friess said. “We were coming back from Stanford and she turned and asked, ‘Should we go for the 5000 record?’ I told her, ‘I think that’s the next step.’”

“She is starting to believe in herself a lot more and that’s incredible to see as a coach. Belief, along with talent, goes a long way.”